Photography by Will Yeoman, Poetry by John Kinsella 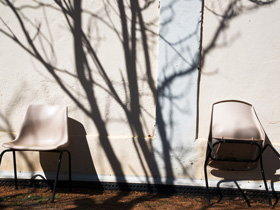 An exhibition of photographs and words.

"I am fascinated by the way apparent ambiguities come about from not being able to position an 'object' in relation to other 'objects', to set something seen in the broader context of seeing - to show the other co-ordinates around a single point; the not being able to show the GPS co-ordinates, so to speak, might actually tell us more about the locally specific than the vista image, the points of reference, the photograph of the broader landscape.

If it is in fact 'all in the detail', then all that's not in the detail is also part of that detail - we can learn about the context of what we're seeing by imagining what its context might in fact be. Even a bird's eye view might be on something very specific, honed and homed in on to separate it off for a moment before bringing it back into context, into its place of connection and belonging. Connections don't cease in the moment of isolating."
John Kinsella 2019.

Will Yeoman travels extensively in his role as an arts and travel journalist. Textures of Ambiguity draws on photographs collected during his travels and those reflecting his Wheatbelt roots. The Wheatbelt has long been home and inspiration for John Kinsella who responds to the call of Yeoman's photographs in this new cycle of poems.